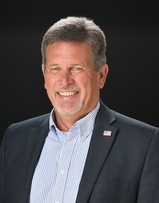 The County Treasurers Association of Ohio is pleased to announce the selection of William Ogg as the CTAO Treasurer of the Year. He was presented with the award during the 2019 CTAO Fall Conference on November 13th in Columbus. He has served as Treasurer of Scioto County since 2006.

Bill was selected for this honor by his fellow treasurers for his dedication and service to his county and the state association.

Outgoing President Dawn Cragon was proud to present the award to her friend and colleague, William K. Ogg, or “Oggie” as he is affectionately called by many.  “Oggie is that one Treasurer whom everyone goes to for common sense advice and experience. He is smart, affable, approachable and a genuinely nice guy who has served his County well for over 13 years,” said Cragon. She cited his humility, dedication and service to his county when announcing the award. Bill is a member of CTAO’s Legislative Committee.

The CTAO and the other 87-member county treasurers congratulate Bill on his award. The CTAO has given the Treasurer of the Year award since 2007.